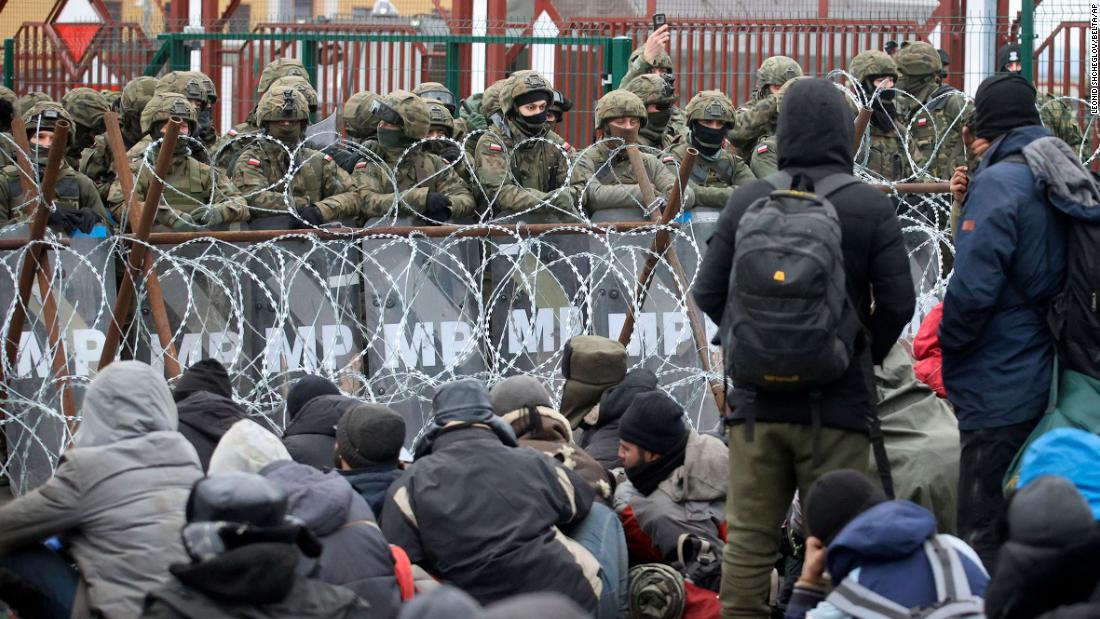 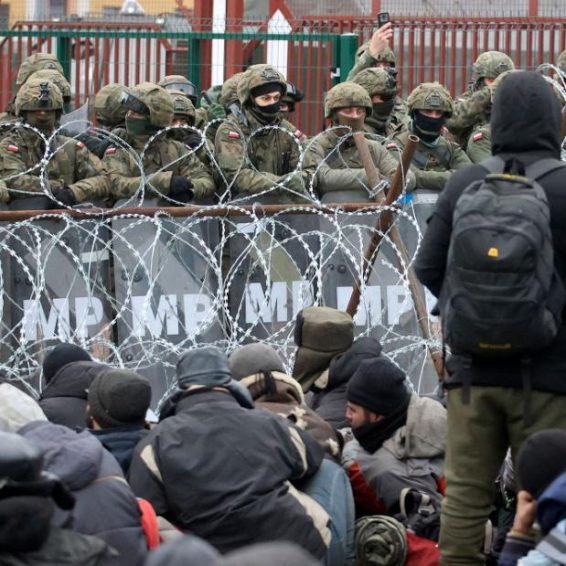 1 week ago·5 min read
ShareTweetPinShare
Home
World News
Violence erupts on Poland-Belarus border
The content originally appeared on: CNN
Polish and Belarusian authorities have blamed one another for the ratcheting of tensions on the border, where thousands of people have traveled in the hope of making it into the EU only to find themselves stuck in freezing conditions.
There were chaotic scenes on the Bruzgi-Kuznica border crossing, where crowds of migrants could be seen breaking up concrete blocks and gathering tree branches to throw toward the Polish side.
Loud bangs rang out over the crowds and a dense cloud of smoke hung overhead. Belarusian state media BeITA reported that the water cannons used by Polish forces sprayed a yellow liquid that caused burning, and that people were suffocating and feeling sick from the smoke. A CNN team was hit by the water fired by Polish guards.
According to BelTA, the deputy head of the Belarusian Armed Forces’ Department of Radiation, Chemical and Biological Protection and Ecology, Igor Malyk, told reporters that Polish security forces had used “toxic chemicals” against refugees.
Read More
“Today we have witnessed how the Polish security forces on the Belarusian-Polish border used special means containing toxic irritating chemicals against refugees, including women and children,” Malyk said.
Seven police officers were injured after being hit by projectiles, according to the Polish police.
Women and children who, just a day before, had been camped out in tents near the border fence had moved back, and men, many of them voicing their anger about being left in limbo in awful conditions, were amassing in the most dramatic clashes to date. “We are fighting to stay alive,” one man told CNN.
The Polish Border Guard said Tuesday that migrants camped out near the Bruzgi-Kuznica checkpoint were behaving “aggressively,” throwing stones and various objects at the Polish services. “In order to prevent illegal border crossing, water cannons were used against aggressive foreigners,” the security agency said on Twitter.
Tensions are rising on the Poland-Belarus border. Here’s what you need to know
Poland’s Ministry of Defense shared footage on Twitter showing Polish officers and soldiers standing shoulder-to-shoulder with riot shields as rocks were lobbed over the barbed wire border fence, describing the scene as an “attack of migrants.” The ministry also accused Belarusian services of equipping migrants with “stun grenades.”
The spokesperson for Poland’s security services, Stanislaw Zaryn, wrote on Twitter on Tuesday about the clashes, congratulating Polish forces for successfully repelling the “first wave of attacks on the border.”
BelTA reported “an aggravation of the situation” on the border on Tuesday, as migrants try “by all means to get to Poland” and Polish authorities respond with tear gas, stun grenades and water cannon, “pouring water on people in the cold.”
“People say they are tired of waiting and are ready to break through,” according to BeITA.

‘We’re going back to Iraq’

Anton Bychkovsky, a spokesman for Belarus’s State Border Guard Committee, told BelTA that the agency was launching an investigation into the “incident” on Tuesday.
It’s unclear what sparked Tuesday’s confrontations but there is a growing sense of frustration among migrants that Europe is not welcoming them. They’re now facing conditions the United Nations has called “catastrophic,” suffering from hunger and hypothermia camped out in flimsy tents in makeshift camps at the border.
Rumors have been swirling over the past 48 hours in the camps that the Polish government might open the border and allow a humanitarian corridor through to Germany. Poland has adamantly denied this and people amassed in the area have received text messages from Polish authorities saying the information was a “total lie and nonsense.”
The SMS message, also received by members of the CNN team in the area, reads in part: “Poland won’t let migrants pass to Germany. It will protect its border. Don’t get fooled, don’t try to take any action.”
Polish forces appeared to have dispersed crowds from the border checkpoint as night fell on Tuesday, with some returning to a camp in the woods while other vulnerable people were being taken indoors.
Belarus’s border agency told CNN that some migrants — including women, children and those with medical conditions — were being moved 1.5 kilometers to a processing center, where they will receive shelter, food and medical treatment. Officials also told CNN a decision will be made on whether to deport them back to their home countries. Most of those gathered on the border are from the Middle East and Asia.
Families could be seen walking away from the scene of clashes, with exhausted children in tow, some carried aloft on their parent’s shoulders. Asked by CNN where he was going, one man said: “Back to Iraq. Goodbye Belarus.”
BelTA also reported on Tuesday night that Lukashenko had instructed the local governor of Grodno to help prepare a logistical center to receive refugees.

The crisis has led the EU to prepare fresh sanctions on Belarus, which it accuses of manufacturing the crisis on the bloc’s eastern frontier.
President Alexander Lukashenko’s government has repeatedly denied such claims, instead blaming the West for the crossings and accusing it of poor treatment of migrants.
NATO Secretary-General Jens Stoltenberg on Tuesday said the military alliance is “deeply concerned about the way the Lukashenko regime is using vulnerable migrants as a hybrid tactic against other countries, and this is actually putting the life of the migrants at risk.”
He was speaking ahead of a meeting with EU defense ministers on Tuesday, and a day after warning Moscow that NATO would support Ukraine against “potential aggressive actions” amid a large concentration of Russian troops near Ukraine’s borders. Ukraine is not a member of NATO or the EU.
The military moves continue to test a fragile political order in the region and deepen concerns over the potential for a wider geopolitical crisis.
Lukashenko spoke Tuesday with ally Russian President Vladimir Putin about the situation on Belarus’ border, days after the two countries flexed their military might near Poland in joint paratrooper drills.
The leaders also discussed the situation in neighboring Ukraine and US-led exercises near Russia’s borders and in the Black Sea, Lukashenko’s office said.
EU slaps new sanctions on Belarus as NATO warns Russia over military buildup
Russia, Belarus’ largest political and economic partner, continues to defend Minsk’s handling of the border crisis while also denying any involvement in it.
The EU and NATO have restated their support for Poland. The EU’s Foreign Affairs Chief, Josep Borrell has called on Belarus to take “urgent action” to ensure the restoration of security at the border.
Jakub Kumoch, the head of the Polish President’s International Policy Bureau, said in a statement on Tuesday night that any new sanctions on Belarus should be “lasting” and “touch as many people as possible responsible for leading to this tragedy.”