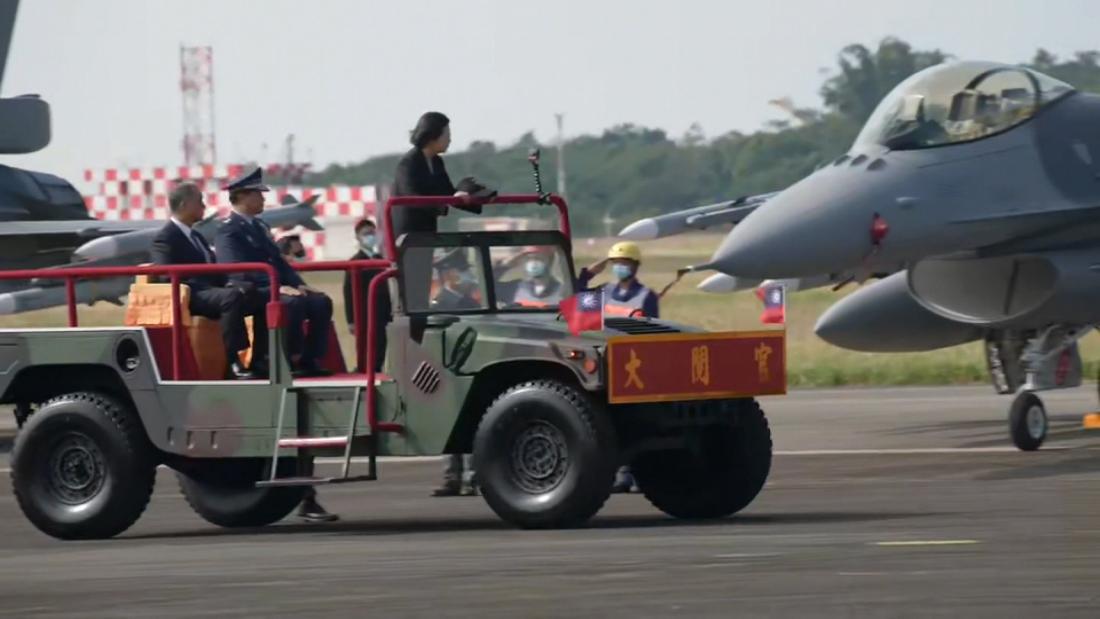 1 week ago·3 min read
ShareTweetPinShare
Home
World News
Taiwan unveils new F-16V fighter jets amid military threats from China
The content originally appeared on: CNN
The F-16s screamed across the sky at Chiayi Air Base on the island’s southwestern coast as pilots performed aerial maneuvers to demonstrate the capabilities of Taiwan’s first squadron of US-made F-16V, or Viper, fighter jets.
The planes were upgraded from older F-16A/B fighter jets, originally acquired by Taiwan in the 1990s, and are equipped with advanced radar systems and new mission computers, according to the official Central News Agency (CNA). The island has plans to upgrade 141 fighters to the newer version by 2023, it added.
That upgrade has already been done to more than 60 F-16s, Vice Defense Minister Wang Hsin-lung told Taiwan’s Parliament on Wednesday.
Taiwan has also purchased 66 new F-16Vs from manufacturer Lockheed Martin in the United States, and delivery is expected to start in 2023, CNA reported.
Read More
More than two dozen of the F-16Vs were on display at the Chiayi base on Thursday.
During the commissioning ceremony, Taiwanese President Tsai Ing-wen said the formation of a new F-16V combat wing has demonstrated the deepening friendship between the island and the US.
“The Lockheed Martin team has provided us with a lot of assistance in completing the upgrade,” she said. “This not only signals the further progress of Taiwan-US friendship, but also represents a firm commitment to Taiwan-US relations.”
US has few good options if China seizes Taiwanese islands, war game concludes
Beijing’s ruling Communist Party has been stepping up its military pressure on Taiwan, including sending 150 warplanes near the island in just five days in October, prompting Taipei to issue radio warnings and deploy air defense missile systems to monitor the activity.
When the sale of the 66 jets to Taiwan was announced last year, analysts said they would provide a competent aircraft to compete with China’s while boosting morale among the island’s fighter pilots.
“This is a very capable aircraft. It’s small, it’s nimble, it’s easy to fly. Pilots love it,” Drew Thompson, visiting senior research fellow at the Lee Kuan Yew School of Public Policy at the National University of Singapore, said.
He noted the fighter can function in many roles, including launching missiles at ships, taking out enemy radar, as well as in air-to-air confrontations.
Australian military analyst Peter Layton of the Griffith Asia Institute said last year that the F-16 sale could help stabilize the Taiwan situation, at least from a military standpoint.
Taiwan won’t be forced to bow to China, President Tsai says during National Day celebrations
“The sale will act to broadly maintain the air combat balance” between Taiwanese (ROCAF) and Chinese (PLAAF) air forces, Layton said.
“The PLAAF has significantly more air combat aircraft than the ROCAF, but in a conflict the ROCAF will be defending and the PLAAF attacking. The difference in roles and that the ROCAF will be operating over its own airfields compensates for the difference in numbers,” he said.
“The additional F-16s will simply keep the balance into the early 2030s,” Layton said.
Communist authorities in Beijing have refused to rule out the use of force to take Taiwan despite having never ruled it. The democratic island has had its own government and military since the end of the Chinese Civil War more than seven decades ago.
US military sales to Taiwan are authorized under the 1979 Taiwan Relations Act as long as they are of a “defensive character.” The act was signed into law after Washington established diplomatic relations with Beijing with a caveat that Taiwan’s future would be determined by peaceful means.
Biden says Taiwan’s independence is up to Taiwan after discussing matter with Xi
The subject of Taiwan was high on the agenda during a virtual summit between US President Joe Biden and Chinese leader Xi Jinping on Monday.
In the talks, Biden raised his concerns over Beijing’s behavior in the region. While he reaffirmed the US “One China” policy, which recognizes Beijing’s claim of sovereignty but allows for US defense ties with Taiwan, he voiced worry that China’s actions were destabilizing the region.
According to a readout of the meeting from China’s Foreign Ministry, Xi blamed rising tensions across the Taiwan Strait on what he called Taipei’s attempt to “rely on the US to seek independence,” and “the intention of some Americans to use Taiwan to contain China.”
In her speech Thursday, Taiwanese President Tsai thanked the air force for working “day and night” to protect Taiwan.
“Regardless of any intrusion, (our air force) can immediately take to the skies to intercept and expel the intruders. This has demonstrated our determination to defend our airspace.”
“I believe that, as long as we continue to defend our free and democratic values, more countries with similar ideals will stand with us,” she added.