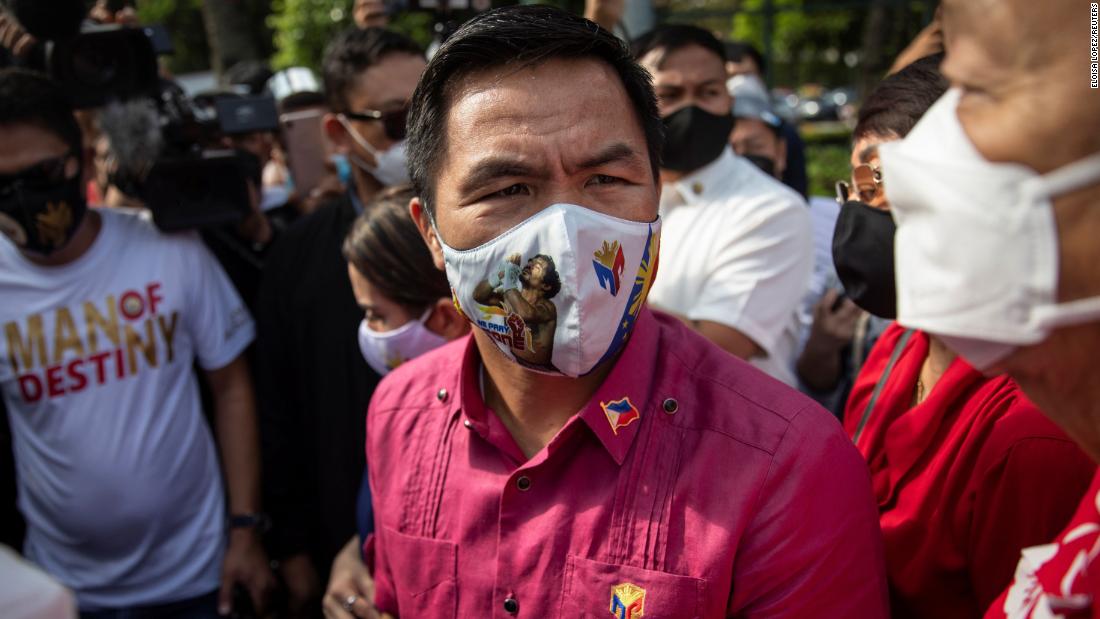 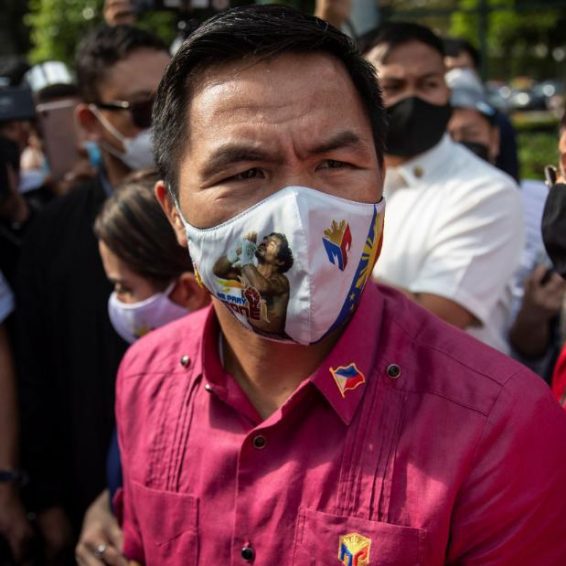 1 week ago·5 min read
ShareTweetPinShare
Home
World News
Manny Pacquiao says he’ll jail former allies if he wins Philippine presidency
The content originally appeared on: CNN
Speaking to CNN in an interview on November 11, the presidential candidate said he planned to investigate some members of President Rodrigo Duterte’s outgoing administration.
“All those corrupt officials should be jailed,” he said. “That’s the only way that we can have economic growth in our country, because that’s the cancer of this country, the hindrance of development.”
Pacquiao hopes to succeed Duterte when the Philippines goes to the polls on May 9, 2022, with official campaigning not scheduled to start until February.
But the race is already heating up.
Read More
One of the frontrunners is Ferdinand “Bongbong” Marcos Jr. — the 64-year-old controversial son and namesake of the late dictator accused of stealing billions from the country during a two-and-a-half-decade reign during which thousands of people were imprisoned and tortured.
Some experts estimate the Marcos family amassed more than $10 billion during the dictatorship. Marcos Jr. has claimed many of the allegations against his family are slanderous.
Pacquiao’s agenda includes trying to recoup some of the “stolen wealth” from the Marcos family, who were exiled for more than five years following a 1986 revolution.
“I am not scared,” Pacquiao said. “This is my fight to give development to our country, to jail those who are continuously stealing the Philippines of its wealth. I want them jailed.”

Weeks of speculation ended on Tuesday when Marcos Jr. and Duterte’s eldest daughter, Sara Duterte-Carpio, confirmed they will be running mates in the election.
Duterte-Carpio, 43, will stand for vice president — elected separately from the President — on the same ticket as Marcos Jr., cementing an alliance between the two powerful families.
Among the other main candidates for the top job are Duterte’s longtime aide, Sen. Christopher “Bong” Go; incumbent vice president and Duterte critic Leni Robredo; and Manila Mayor Isko Moreno, a former actor.
According to Richard Heydarian, associate professor in politics at Polytechnic University of the Philippines, dynasties and celebrities have dominated the country’s politics since the fall of the Marcos dictatorship.
“For a while, the celebrities presented themselves as kind of a self-made alternatives to political dynasties,” he said. “Nonetheless, just because you’re a celebrity doesn’t mean you’re going to win.”
But Pacquiao has a fighting chance.
The wide field of candidates, combined with the Philippines’ first-past-the-post electoral system could work to the former boxer’s advantage, Heydarian said.
“Let’s not forget, in the Philippines, we have no run-off elections,” he said. “All you have to do to become the President is to win more votes than everyone else.”
In 2016, Duterte did just that — winning the presidency with just over 39% of the vote.
A dictator’s son. A former actor. A champion boxer. Inside the manic race to replace Duterte as the Philippines’ leader
Despite criticism that he prioritized his boxing career over his congressional role, Pacquiao’s political star has risen over the past five years under Duterte’s rule.
But relations between the two men have faltered in recent months.
Signs of a rift in the ruling PDP-Laban party began in March when the former boxer criticized Duterte’s stance on a maritime dispute with China and accused government agencies of corruption.
Speaking to CNN, Pacquiao also questioned the Duterte administration’s handling of Covid-19.
“The Filipinos are dismayed with how the people in charge of the Covid response handled the pandemic,” Pacquiao said. “We are the laughing stock in terms of Covid response as well as corruption in the government.”
In July, Pacquiao said $200 million in pandemic aid meant for the country’s poorest people was unaccounted for. Duterte responded by challenging Pacquiao to name corrupt government officials to prove the former boxer was not just politicking ahead of the election.
The race for President has been repeatedly overshadowed by the controversial incumbent, who is currently facing an International Criminal Court investigation into his “war on drugs,” in which police say more than 6,600 people were killed. The government has said it will not cooperate with an international probe because the Philippines has a functioning justice system.
Duterte, who is barred by the Constitution from seeking a second term, will run for senator in next year’s election. Meanwhile, his youngest son, Sebastian Duterte, is running to replace Duterte-Carpio as mayor of Davao, on the southern island of Mindanao.
According to Heydarian, the outgoing President “needs a fortress, because the International Criminal Court most likely will push ahead with full-scale investigation. And we may even see warrants of arrest against some of the top officials in the Philippines.”
Pacquiao said he would investigate the Duterte administration for its role in the killings.
“I will continue the war on drugs in the right way,” Pacquiao said. “You don’t need to kill them in the streets, there’s a due process, (giving) them the chance to defend themselves to prove that they are innocent.”

Unlike some of his rivals for the presidency, Pacquiao was born into poverty.
He sold candy and cigarettes on the streets as a child to provide for his siblings and single mother and began his boxing career fighting for a few pesos in unsanctioned bouts.
The only boxer ever to win world titles in eight different weight divisions, Pacquiao retired from boxing this year following a glittering 26-year career.
His success in the ring and famed generosity — in 2016 he estimated he’d given away $200 million to help the poor — have made him a national icon.
Though his non-traditional career route has put off many in the middle-class, Pacquiao is hugely popular among poor Filipinos, who are inspired by his rags-to-riches story, according to Heydarian, from the Polytechnic University of the Philippines.
“Pacquiao has 100% name recognition, Pacquiao has lots of money, he has (a) network across the country, and he’s a very charismatic guy,” Heydarian said. “He also comes from a very poor background (and) his life story is also extremely inspiring.”
Pacquiao said it is his unusual path — and his self-made success — that sets him apart from other candidates.
“I am not a traditional politician,” Pacquiao said. “I am a very forward and direct person, I do not hesitate to say what is right.
“I want to give Filipinos a good life, a good future, that is my goal, that’s why I entered politics.”