Analysis: How an investigation into Beirut’s port explosion is rattling Lebanon’s elite 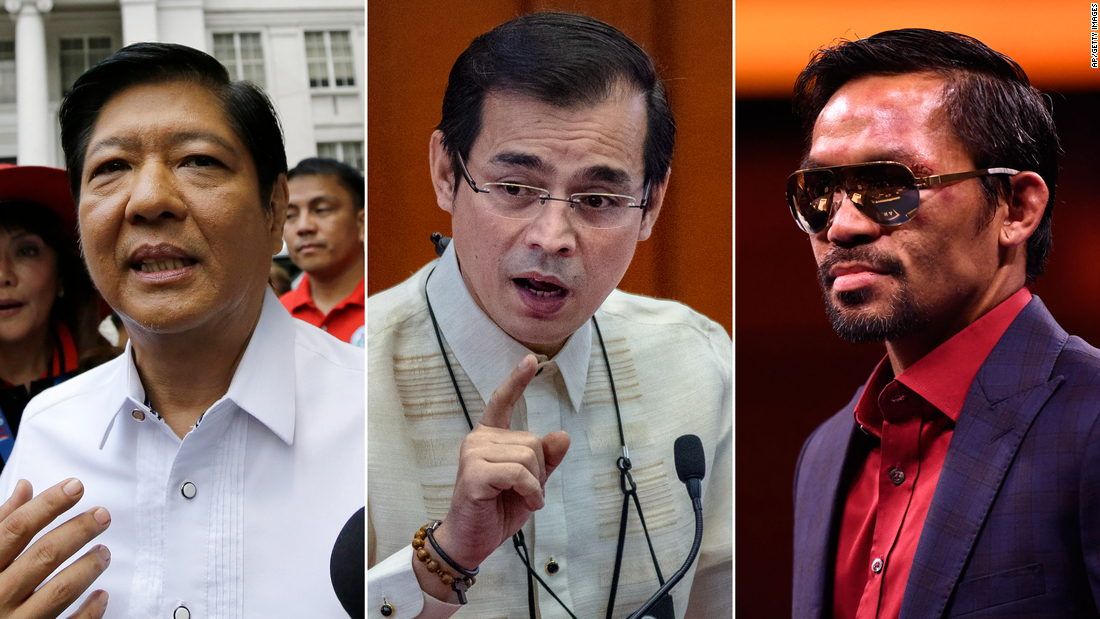 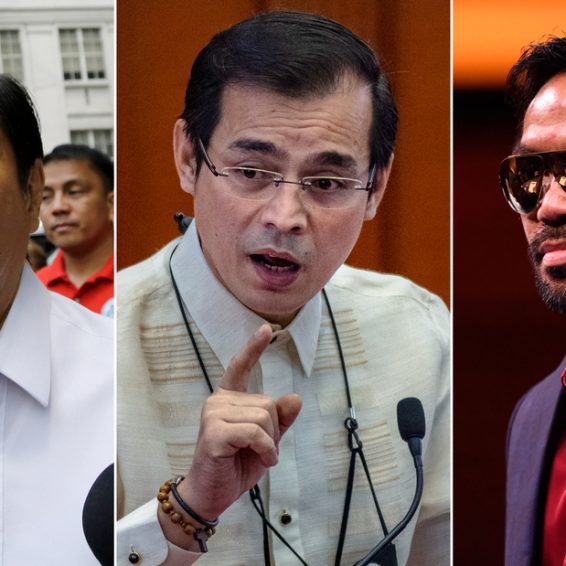 Inside the manic race to replace Duterte as the Philippines’ leader

6 days ago·9 min read
ShareTweetPinShare
Home
World News
Inside the manic race to replace Duterte as the Philippines’ leader
A diverse field of candidates have put up their hands to succeed Philippines President Rodrigo Duterte, who is stepping down after a single six-year term in line with the Philippines constitution.
Although the 2022 presidential election campaign is yet to begin, the machinations and drama are well underway.
Friday was the final day for candidates to announce their intention to run. Among those who officially filed are Ferdinand “Bongbong” Marcos Jr., the son of a former Philippines dictator; Manny Pacquiao, a senator and former boxing champion; Vice President and Duterte critic Leni Robredo; and Isko Moreno, the mayor of Manila and a former actor.
Richard Heydarian, professor of history and political science at the Philippines’ Polytechnic University, says there is no clear frontrunner. “It is going to be highly, highly competitive,” he added.
Read More
The Philippines has only one round of voting, unlike many countries such as France, where there is a second ballot between the two most popular candidates. This means that whoever is in front at the end of counting will become president — no matter how small their total share of votes.
In a tight race, the prize could go to anyone. And the stakes are high.
With China and the US increasingly treating the Indo-Pacific as a staging ground for their global showdown, the Philippines will likely come under growing economic and geopolitical pressure, particularly as a claimant to part of the South China Sea.
During his time in office, Duterte aligned the Philippines closer to Beijing, publicly stating his “love” for President Xi Jinping as the leaders explored the possibility of joint resource contracts in the South China Sea.
At home, he has cracked down on civil society and sparked a bloody war on drugs that has claimed the lives of more than 6,000 people, according to police.
And there are signs he may not be willing to let his influence go so easily. After accepting his party’s candidacy for vice president, Duterte announced last week he would be retiring from politics. Critics have pointed out Duterte also announced his retirement in 2015 before he changed his mind and ran for president.
Not only that, but his daughter — Davao Mayor Sara Duterte-Carpio — still has a month to decide if she’ll run for president as a substitute candidate.
Duterte has a personal incentive to retain some control over the future government: he’s facing an investigation by the International Criminal Court into his war on drugs and his successor could influence how much access they get to the Philippines.
Journalist Maria Ressa, the 2021 Nobel Peace Prize winner and president and chief executive of local media outlet Rappler, said the 2022 elections were “existential for democracy.”
“We’re at the edge of a cliff … whoever wins will determine whether we’ll have rule of law, whether our economy can grow, whether we can survive the virus, whether our society can heal,” she said.

In a post to his official Facebook page on Tuesday, the son of the man accused of imprisoning, torturing and impoverishing the Filipino people asked his supporters to join him in “the noblest of causes.”
Marcos Jr., known colloquially as “Bongbong,” announced he would run for president in the 2022 election, pitching himself as a unifying candidate who could bring the country together after the ravages of the Covid-19 pandemic.
The date of his announcement was inauspicious — it came just after the 49th anniversary of his father, Philippines dictator Ferdinand Marcos, imposing martial law on the country.
Marcos ruled the country with an iron fist for two-and-a-half decades before he was deposed by a popular protest in 1986.
The Marcos family profited greatly from its time in power, with some experts estimating a net gain of more than $10 billion during the patriarch’s dictatorship. Marcos Jr. has claimed many of the allegations against his family are slanderous.
But human rights groups in the Philippines are horrified at the prospect of a member of the Marcos family running for the country’s highest position. Protesters rallied outside the Commission on Human Rights building in Manila on Wednesday to show their disgust.
Philippines rights groups decry presidential bid of late dictator’s son
“The Marcoses remain scot-free from jail, they haven’t returned all the money that they got from the nation’s coffers, and now they are making a comeback for the highest position in the land. That is just plain, shameless gall,” Cristina Palabay of rights group Karapatan told Reuters.
Duterte has not been ashamed to tie himself to the Marcos family. There were even suggestions he might join Marcos Jr.’s ticket as candidate for vice president. “That’s the plan!” Marcos Jr. said Wednesday, according to ABS-CBN.
Ressa said Duterte’s popularity in the south of the Philippines, combined with Marcos’ popularity in the north, would create a formidable force.
Heydarian added the Marcos family had “grassroots support, resources and message discipline,” but their history would not play well with a population concerned about corruption.
“The issue of corruption is very, very sensitive for a lot of people,” he said.

Pacquiao’s skill as a boxer is unquestionable. After a 26-year career, he is considered one of the greatest boxers of all time, the only man to hold world titles in eight different divisions.
But the 42-year-old’s skill as a politician is far less clear — and something he will have to prove if he is going to be successful when he runs for president.
Highly charismatic and proudly Christian, Pacquiao was first elected to the Philippines senate in 2016, saying he wanted to help the country’s underprivileged. Pacquiao has said he lived in extreme poverty when he was young, selling candy and cigarettes to make ends meet. As a teenager he worked as a laborer to help his family — now he is a multimillionaire.
But Heydarian said since he joined the senate, Pacquiao’s time in office has been underwhelming. “He’s entering this race as someone whose mantle of statesmanship is still under question. He didn’t have the most impressive performance as senator,” he added.
Rather than running for vice president first, to show he was serious about the role, Pacquiao has jumped straight to the top job — and Heydarian said that might be a bit “early” for people. Still, his popularity with the country’s poor could make him a contender.
Duterte has previously said he sees Pacquiao as a potential successor, someone to stand for president with his blessing in 2022. But relations between the two men have soured — Pacquiao has publicly questioned Duterte’s attitude to China and accused his administration of misplacing $200 million in pandemic aid for the Philippines’ poor.
Pacquiao also has critics on the other side of the political divide, Ressa said. The boxer has frequently made controversial statements about LGBTQ rights and abortion. In 2016, while running for the senate, Pacquiao said gay people were “worse than animals.”
Ressa said the Philippines will need urgent action to recover from the Duterte years and the Covid-19 pandemic, and questioned whether Pacquiao had the political coalition or the governing experience to make it happen.
“Whoever will become president next will have real problems to deal with, and they’re going to have to have competent people to deal with it,” she said.

Pacquiao isn’t the only rags-to-riches story of the 2022 campaign — nor the only star.
Manila Mayor Moreno, who filed his candidacy for president this week, has had a meteoric political rise over the past three years. A native of Manila, he said he grew up in the city’s slums where he made a living by collecting trash to be resold.
He rose to prominence as an actor in the 1990s appearing in “bomba” films, a type of softcore erotic movie made in the Philippines. Moreno often played the romantic lead.
In fact, Moreno’s real name is Francisco Domagoso — Isko Moreno is his stage name.
Using his reputation as a stepping stone, Moreno moved into politics in 1998 as a city counselor in Manila before being elected vice mayor in 2007, and then mayor in 2019.
Just two years after his win, he is aiming to lead the entire country. Like Duterte, Moreno is a populist, Heydarian said, but one of a different stripe.
“(He) represents what I call ‘polite populism’: cost-free, family orientated, even pious kind of rhetoric,” he said, adding that Moreno trumpets centrist and even at times progressive policies.

At the other end of the spectrum from Marcos is incumbent Vice President Robredo.
In the Philippines, presidents and vice presidents are elected separately and can even be from different parties. A human rights lawyer, Robredo has been a frequent critic of the Duterte administration and has fought publicly with the President over his war on drugs, which she called “senseless.”
In 2019, Duterte appointed her as co-chair of the government’s anti-drug agency for less than three weeks before firing her for setting up meetings with international agencies.
She has also been honored for her work advocating for gender equality and women’s rights.
Philippines says it will investigate more than 150 police officers over Duterte’s deadly drugs war
Accompanied by her two daughters, Robredo on Thursday called for the country to follow her and help “ensure a future of equal opportunities.”
Heydarian pointed out that Robredo is currently running fifth in the polls despite her national reputation — behind Marcos, Pacquiao and Moreno.
However he said the Vice President had a wide network of supporters across the country from her time in office. “We saw in the 2016 (Vice Presidential) election she was able to turn things around against all odds and against a very competitive candidate,” Heydarian added.

The shadow of Duterte

While the country’s attention has largely been fixed on the candidates who have already declared, none of them are leading recent polls, according to Heydarian.
He said the most popular contender is Duterte-Carpio, Duterte’s daughter.
As of Friday, Duterte-Carpio had not declared her candidacy but instead has filed paperwork to run again for Davao mayor. On Monday, her spokesman said she had “no intention” of taking the leadership of her father’s party.
Philippines President Duterte announces he’s retiring from politics at the end of his term
But under the quirks of the Philippines election system, filing for the mayoral election means she now has until November 15 to consider switching her campaign from mayor to president under a substitution.
That’s exactly what her father did in 2016.
Heydarian said Duterte-Carpio isn’t like the President in many ways — she welcomes the opinion of experts and takes considered decisions, unlike her impulsive father.
But critics have seen her potential candidacy for president as another way for Duterte to hold sway over the Philippines after he leaves power.
And that is assuming her father doesn’t change his mind about running for vice president. Ressa said she doesn’t trust Duterte’s statement that he would retire from politics — he said the same thing in 2016 and then ran for the country’s highest office.
Whoever ends up taking power in the Philippines, Ressa said they will inherit a country “in a far worse place” than Duterte did.
“The legacy of Duterte is the breakdown of the different branches of government and the corruption of the different weak institutions,” she said.
“We were just at the point where our institutions were starting to solidify … the last five years have really taken those dreams and dashed them.”